We would like to share with you an early bird to a function which was done for Samsung Galaxy S(2/3/4) devices.
This version will hopefully be available for download soon sometime during September on Samsunng App store.

Check the features in the next video:

PixMix is also available in iOS (iPad & iPhone) on iTunes (checkout latest version info) and in the Samsung Store.

Thank you all for your downloads and feedback! 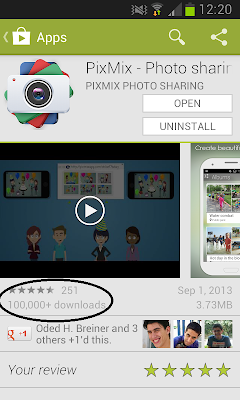 Posted by Gal Levinsky at 9:30 AM No comments:

Whether photos are captured via iPhone or camera, there is usually also the need to view them on an iPad, which provides better visual experience.
The newest version of PixMix (v20) is focused in improving the experience in iPad.


PixMix is a free downloadable photo-sharing app for either your iPhone or Android phone. So, if you want to share photos with other people, the program allows you to easily do this. One of the greatest things about this app is that you don’t have to know a lot about your phone to use PixMix.

What is new in recent version?


The newest PixMix version has had some technical improvements – ensuring that you, the user, have a much smoother and more fun experience than previous versions.


In PixMix it is easy to create photo albums for personal organization and for sharing. The previous PixMix version supported 4 photos in each row. The new version allows you to view more photos at the same time.

2 – Album preview
Each album in the left pane can be previewed by simply swiping the relevant album cover to the left.
When an album cover is swiped to the left, eventually the album will open and the album photos will be presented on the right pane.

See the below photo for an example of preview feature.

4 - Application Setting
The application setting is accessed via the cogwheel icon.
The last version enables users to sync the PixMix application with a personal email and nickname.
This is useful if you want the PixMix photos that exist on another device (e.g. iPhone) to be transferred to the iPad as well.
So the albums and photos will be instantly synchronized across devices.

PixMix v20 for iPad offers an easy feedback option that makes it easy for users to get in touch with us.
If you like the program, you can easily share PixMix with your friends through the “Tell A Friend” button.


5 - Suggested Albums
What are the suggested albums?
These are photo albums that, when detected by PixMix, are suggested for sharing.
PixMix removes the hassle of selecting photos manually when creating an album by automatically detecting photos, which are similar by time and date.
After PixMix identifies a series of similar photos, it will suggest it as a PixMix album and will prepare it for sharing.
One will still have the ability to remove photos from the suggested album.
This function will assist with album organization and will simplify the sharing action to one click.
Suggested Albums are marked with a red ribbon and the text "suggested", so it is easier to distinguish whether the albums were created by the user or automatically generated by PixMix.

Posted by Gal Levinsky at 4:47 PM No comments: