Are you missing out on your kid's kindergarten party because you have a business meeting you can't reschedule?
Well, then there is one way by which you can be a part of the party without being physically present. All you need is an android or iPhone along with the free PixMix app downloaded on your phone and you can be part of the happiness and celebrations.

PixMix app enables you to take pictures and share them immediately with all those people who are missing out on the fun.
While there are many photo sharing applications available, PixMix is a clear winner as you can share the picture in just three steps.
You click the picture, post it on your album and share it with your selected list of friends.
Unlike other sharing apps, you do not have to register or log in to access the pictures. The system in PixMix is such that once you download the free app, you are automatically assigned with a link to upload and name the albums you create.


It also has the feature in which PixMix will identify the people in the picture and suggest their names to share the album with. You will be able to transfer as many as 300 pictures with just one click.

As a user of PixMix, you decide with whom the pictures should be shared with so that you can protect your privacy.
Interestingly, once you share the private album with your friends, you are also giving them access to post pictures on your album.
So, if you wish to exchange photos with other kids' parents, just click share the album with them.   It is that simple.

PixMix will create an automatic backup of all the images on cloud. If you want to go to the archive and select any particular picture, you will be able to easily access it on the cloud.

If you want to view it online, you can view the pictures on a private web gallery. In fact, you can do a live slideshow presentation at the event by connecting to the web gallery.
If any candid moments have been captured, then the live presentation will be full of laughs and fun.

Posted by Gal Levinsky at 2:45 AM No comments:

I'm proud to announce the release of the latest and greatest PixMix version for iPhone !

But we've also added some major experience features, so lets show them off:

The New design will let you see photos in a beautiful album cover.
Well, they say a picture is worth a thousand words, so here's two -

We think that it was definitely worth waiting, hope you like the outcome!

When creating a PixMix album, you can add photos using the camera, from friends (via link) or choose existing photos from your gallery.
Since the recent release, choosing existing photos has never been easier.
The album list includes, in addition to your current PixMix albums, suggested albums.

What are suggested albums?
PixMix identifies photo collections that are related to a certain event and groups them in the album list under the "Suggested albums" section.
All you are left to do is tap the album!

Think about it for a second,  In just 2 taps. you can share multiple photos with friends and family!
Tap 1 - select an album.
Tap 2 - share button.
That's pretty cool, right? 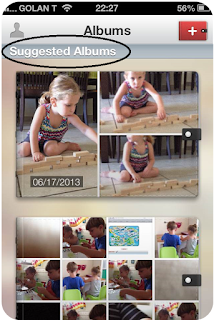 With your help, the popularity of PixMix is rising, we feel very humbled and see it as a sign that we are on the right track :-)

So please spread the word... and thank you!

Posted by Gal Levinsky at 3:23 PM No comments: